Having risen from smoky basements to packed arenas, 1000mods can be considered no less than the most successful Greek rock band of the past decade.

Deriving equally from the glorious 90’s and the 70’s (not only songwriting-wise but also due to their love for vintage equipment and analogue sound), 1000mods have never hesitated to blend all their influences. Retro-rock and doom rock, hard and space rock melded with grunge and alternative create a recipe of explosive heavy music that’s impossible to imitate.

1000mods offer inspired, powerful and uniquely fresh heavy tunes, satisfying everyone from stoners to metalheads, for over a decade. Their debut Super Van Vacation (2011) is now considered a classic in European heavy rock, as well as a game-changer for Greek rock music, selling tens of thousands of copies.

Praised by fans and press throughout the globe, the band’s previous release Repeated exposure to… (2016) affirmed their place within European heavy rock and roll. The band went on to tour the US in February-March 2018, following that with a sold-out tour of Australia.

Boasting millions of streams and fans worldwide, 1000mods are stepping up with Youth of Dissent, a fearsome blend of taut songwriting, hard-hitting riffs, haunting melodies and hefty psychedelia. 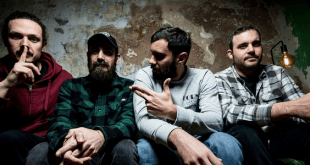 Rockers 1000mods have released another single from forthcoming LP!