With an acoustic guitar in his hands and a giant stomp box under his feet, Winnipeg’s Greg Rekus delivers his own unique brand of punk rock-infused folk music guaranteed to shake rafters, move floorboards, and get even the most stoic of concert-goers out of their seats. From the U.K. to the Ukraine, through Canada, the United States and Mexico, Rekus is no stranger to the touring circuit, sharing the stage with friends and delighting audiences far and wide with songs from his three independently released full-length albums, all the while setting an entirely new standard for DIY music.

Rekus’s latest full-length album, Sibling Cities (2017), once again enlists the genius of John Paul Peters (Royal Canoe, Comeback Kid Propagandhi) as engineer/producer. Featuring local musicians Tabitha Hemphill on bass and back-up vocals, and Erik Strom on drums, the album boasts thirteen original tracks and picks up where his previous release Punkoustic (2014) left off, retaining the raw passion that characterized his earlier work, but featuring a stronger influence from the more melodic qualities of pop-punk. With more mature and insightful lyrics, tasteful arrangements, and diverse tempos, Sibling Cities is evidence of a musician devoted to refining his craft, and can be considered among Rekus’s best work to date.

During live performances, audiences are treated to an entertainer who treats the stage as his home. With high energy and infectious enthusiasm, Rekus has a natural ability to engage with a diverse assortment of crowds from around the world. His lyrics speak to common experiences, such as drinking in a favourite hometown bar, or the simultaneous joy and heartache of falling in love, but also do not shy away from making pointed political commentary, coloured with the anger and frustration that comes along with it. Delivering each line with a force that is rivaled by few other solo artists, Rekus emphasizes his words with every strum of his guitar, pounding the beat out on his custom-built stomp box.

After the highly successful release of Sibling Cities (2017), Rekus spent seven months on the road playing over 150 shows, which included some of the greatest punk festivals of the year such as No Idea Record’s The Fest in Gainesville FL, and Oakland CA’s TIM Fest.  After taking a month off to re-group, Rekus will be back in the saddle January 2018, teaming up with Tim Holehouse from London, England for a month of touring across Western Canada, the Western United States, and Mexico. Come spring, Rekus will hit up some of his favorite places in the Mid-West United States before heading overseas for a few weeks in the UK and two months in mainland Europe.

Rekus’s passion for music is bursting at the seams. It is the driving force that keeps him constantly on the road, and cranking out album after album of folk punk goodness. His hard work has already gotten him to places he never thought attainable, and as far as he’s concerned, the only way from here is up. 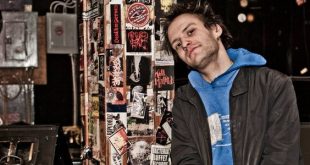 Greg Rekus talks about the importance of touring!

Greg Rekus talks about his new record, “Death and Taxes”!

Greg Rekus talks about being on tour and latest album!