Nothgard is an epic melodic death metal band from Germany, founded in 2008 by Singer and Lead-Guitarist Dom R. Crey and the former drummer Toni. The band stands out due to the two technical guitars and their intoxicating live shows.

After a few months of jam sessions, they started to work on their own songs. Of course there was an indispensable need for a bassist and rhythm guitar. Vik joined the band as man responsible for the pressure. Simultaneously with Chris (rhythm guitar), Lena became a member of the band, giving the songs a symphonic touch by playing the keys. So their collective ideas let develop varied songs with lots of influences out of death-, folk-, and classic. The last need was a band name, which was found in “Nordavind” for the present. Finally the band was more or less ready to start with rehearsals. Soon the first gig came ahead in a local biker hall what was a good chance to demonstrate the new written stuff and get feedback in any way. Unfortunately dissensions between the members caused an egress of Chris and Lena of “Nordavind”. But that was no reason to put the project on ice.

The time gained was used to work on the first three demo songs “Rise after Falling”, “Sword Of Xanten” and “Funeral March”, which were released via MySpace in September 2009. After nights out, searching for two more capable musicians a new Keyboarder was found in Rosh. Daniel K. became the new rhythm guitarist. Now a new band name was essential. Furthermore nights came across spent with thinking about a new name. Eventually and fortunately it was found in “Nothgard”.

In 2010 the band stared with some gigs in Germany, Austria and the Czech Republik. A highlight for the young band was the Metalfest Open Air, where Nothgard played in front of a very impressed and interested audience. In June the guys signed a label and booking contract with Black Bards Entertainment. In November drummer Toni has decided to leave the band for some private reasons, therefore Nothgard was looking for a new drummer.

In April 2011 the band has released their debut album called “Warhorns of Midgard”, which received rave reviews. In the same month they performed their first European tour together with Skyforger, Heljareyga, Gernotshagen, Kromlek and Northland.

After a long period without a steady drummer Nothgard has found a new virtuosic member in Dominik Ziegler. Only five months later the band and Rosh have decided to go separate ways. 2012 Skaahl joined the band as their 3rd guitarist. Since then the line-up is constant and stronger than ever.

With their new and second album the Band is heading straight towards to originality, technical finesse and maturity. The new material will be bombastic, epic and very technical simply because all three Guitars establish a new way of a harmonic interplay between rhythm and double-leads. Beside this “Guitar-Orchestra” the orchestra parts of the keys ensure pure epicness and heroic power all along the line. The songs were received very good live as well as on the album, which resulted in lots of reviews and two european tours. Before they released „Age Of Pandora“ the band played a ten days long headliner tour through Spain, and then they went on a big european tour together with Equilibrium and Trollfest, which brought them to many different countries. The year 2015 brought the last line-up change so far, because longtime bassist Vik decided as well as guitarist Daniel to leave the band for private reasons. Nico Kolja was confirmed as new bass player of the band. Furthermore the band decided to continue with two of three guitars, which doesn’t affect the bombastic sound of the band.

Right now Nothgard are looking forward to the most exciting chapter of the bands history. The release of their third record „The Sinner’s Sake“ is planed for September 2016 and will hit the stores via Noise-Art-Records. The next european tour together with Equilibrium, Heidefolk and Finsterforst has already been confirmed. It will start in the week of their records release. The combo around songwriter Dom R. Crey was again able to reach a high technical level as well as defining their sound more and more. Together with an optical decent show, which is underlined by three music videos as well as of course live on stage, the listeners can also look forward to great guest appearances. Beside guitar virtuoso Jeff Loomis (Arch Enemy, Conquering Dystopia), Jen Majura (Evanescence) can be heard as well as Robert „Robse“ Dahn (Equilibrium) on the new Nothgard record „The Sinner’s Sake“.

Previous Fire Next Time
Next Revolutio 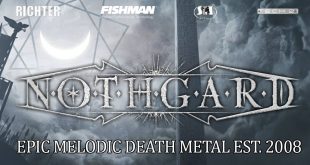 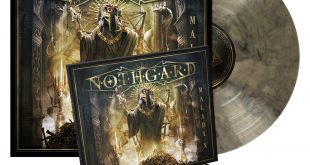