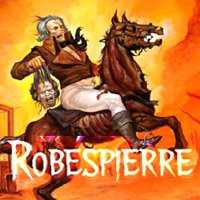 Inspired by the emerging NWOBHM and some of the more extreme (for the time) bands from the USA, Robespierre’s brand of metal fused with punk was classed as ‘Speed Metal’ although there have been elements of ‘Doom Metal’ in their work. The songs written by Logan and Cooke have a raw spontaneity, retaining their freshness and humour throughout the intervening years.

Only one of the two demos was ‘released’ – the first featuring ‘Backs To The Wall’, ‘Die You Heathen, Die!’, ‘I Am A Cannibal’ and ‘March Into Hell’. This ‘release’ involved the handing out of a cassette tape to two people in Liverpool. Since then the tape has been copied and copied until it has spread all over the world, affording Robespierre a cult following primarily based on the mystique surrounding the band as much as their music. People have also been downloading a multi-generation copy online.

The second demo – featuring ‘Maelstrom’, ‘Robespierre’, ‘Medusa’, ‘Decapitation’ and ‘The Ninth Thermidor’ remained in the vaults, so to speak, and no one outside of the band (and Peter May who contributed some backing vocals) and BBTAD (Buried By Time And Dust) have ever heard these recordings.

The complete demo collection was released in Summer 2011 on BBTAD on vinyl and on SKOL a year later on cd.

Gordon Logan and David Cooke have been amassing Robespierre material over the years and have completed an album entitled GARDEN OF HELL featuring 10 raw and heavy songs very much in the style of their classic work. This was always a side project for the two, which was done for the love of the music with no other ambitions. The popularity of the original demo was discovered by the duo in late 2010, being completely unaware beforehand. It was never pursued as a full-on venture due to the perceived unpopularity of the style of music at the time, particularly in Liverpool which was dominated by new wave/pop.

BROFEST #4 saw Robespierre’s first ever live performance. The 40 minute set went down a storm. You can see the entire performance on YouTube.

GARDEN OF HELL is to be released in the autumn of 2017 on SHADOW KINGDOM RECORDS.

Previous Septicflesh
Next The Final Clause of Tacitus 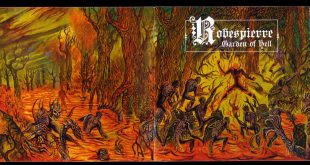 Robespierre – Release for “Garden of Hell”