Home / Interviews/Hardcore/Our meeting with Forest in Blood at Hellfest 2022! 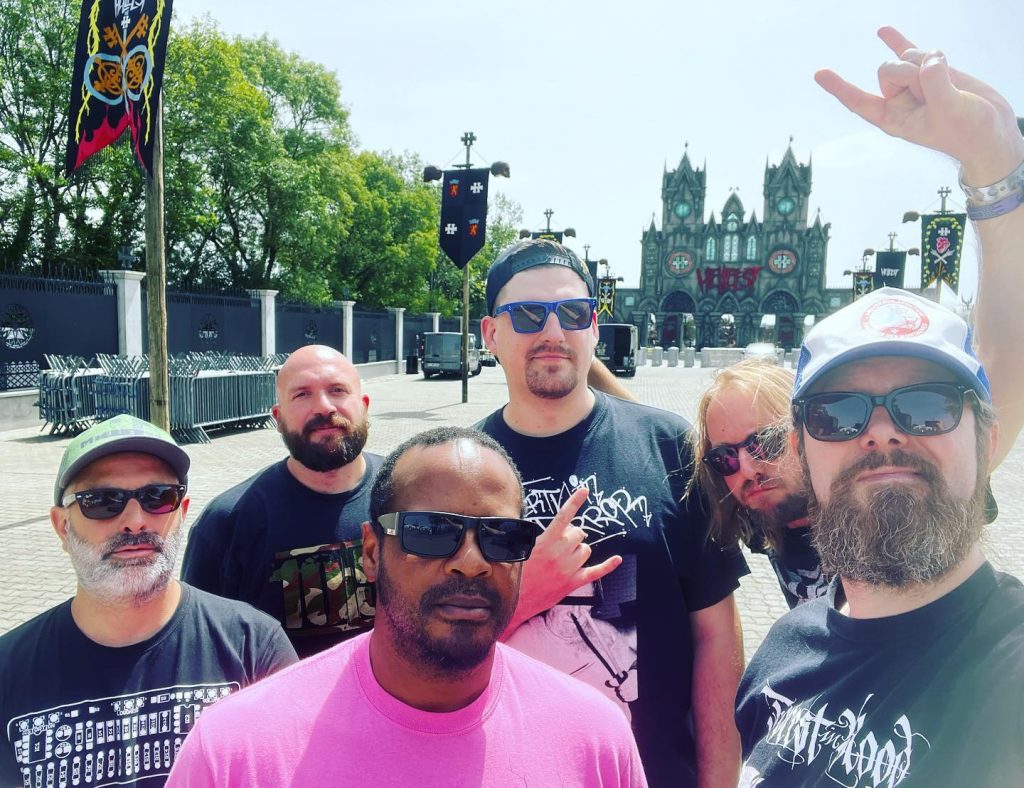 Hi Forest in Blood, thanks for taking the time to answer our questions. Can you please introduce your band?

Barth : We are Forest in Blood, we exist since 1998. We met after the world cup.

Barth: No, it’s not true (laughs). We met before! We were young at the time, then it worked out pretty well. We toured quite a bit, we signed on a Dutch label and we toured Europe for several years. After that, we were a bit tired.

Elie: A short break of a few years.

Elie: So we started again!

Barth: Then we created an album that was very well received, then a second one that was even better received. And now…

Elie: We are preparing the next one!

Barth: Well, we’re planning the third one. And we’ll see what happens!

What did you do during this 10-year break?

Nech: We took the opportunity to practice what we couldn’t practice.

Barth: (laughs) To earn a little bit of money.

Elie: To stabilize ourselves.

So, did you always have in the back of your mind the idea of getting the band back together?

Barth: No, but we are childhood friends.

Nech: And it never really stopped either.

Barth: Well, we played a little bit, but that’s it. We are childhood friends.

Elie: The four of us continued for a while, we made a mini CD. But then we stopped quickly. In 2011, we released a CD of 5 tracks, and then… We didn’t do anything after that.

You started in 1998. Comparing your beginnings and the current scene, how much has it changed according to you?

Elie: We were paid in francs (laughs)

Barth: Yeah and it was a lot worse! No, it was maybe more violent. There were people, but the society was more violent for metal.

I think that in terms of band management, it was also completely different. Today, when we see how important social networks and digital are…

Elie: At the time, there was Myspace!

Elie: There was no Internet. Everything was done by phone, I had the contact of someone, I called…

Barth: There were paper webzines, the old-fashioned kind!

Which still exist a bit today.

Elie: And the little ads for musicians, like “Roger, bass player, looking for a band in the 77”.

Barth: Yeah, that’s it! We mostly met in the rehearsal rooms. There were very famous rehearsal rooms in Paris, the Luna Rossa, some places, or the Mains d’Œuvres, and all the bands played in those places and we shared our thing with No Return, then with NFZ, with A.S. Dragon (laughs). In fact, all the bands, whether it was pop, super famous pop or whatever, we all rehearsed in the same place. So we were sharing the space with Kick Back…

It was a completely different management than today.

Barth: Yeah, it was more human! We were closer. Afterwards, we were in rehearsals all the time. We rehearse less now. At that time, we had nothing else to do!

Nech: We didn’t have anyone at home who was complaining.

Let’s talk about your latest album, “Haut et Court”, released in 2020. How long did you work on it?

Barth: It’s a bit of a special project. In fact, we were a bit overwhelmed and so we said “We have to release an album” and we wrote it in two weeks! So, I won’t hide that we didn’t know everything. The same day, we said “Oh yeah, that’s not bad” (laughs).

Elie: But it’s a great exercise!

Barth: So we wrote everything in two weeks, but we did a month of recording. So we took our time at Andrew’s, because we knew each other well. We really worked on the arrangements with the sound engineer, all together, because we discovered what each one had written on his side.

Nech: We were sending each other WhatsApp messages “Here, I did this!”. “OK. Well, I did that!” (laughs). No, but the day of the recording, I finished the drums, they called me “No, that’s not right…”.

Barth: You have to change!

Nech: “You have to change that”. Okay… you’re re-doing a whole drum set. But it was cool!

Barth: Yeah, plus we were working… I don’t know why, but just before the lockdown, we were all working really hard! And so we were all alone in the studio with the sound engineer doing our stuff, and then, the next guy would come in and add his touch and so on. After that, we decided to do something very raw, very pure and we think that it came out well. Everyone thought the sound was great on the last album. 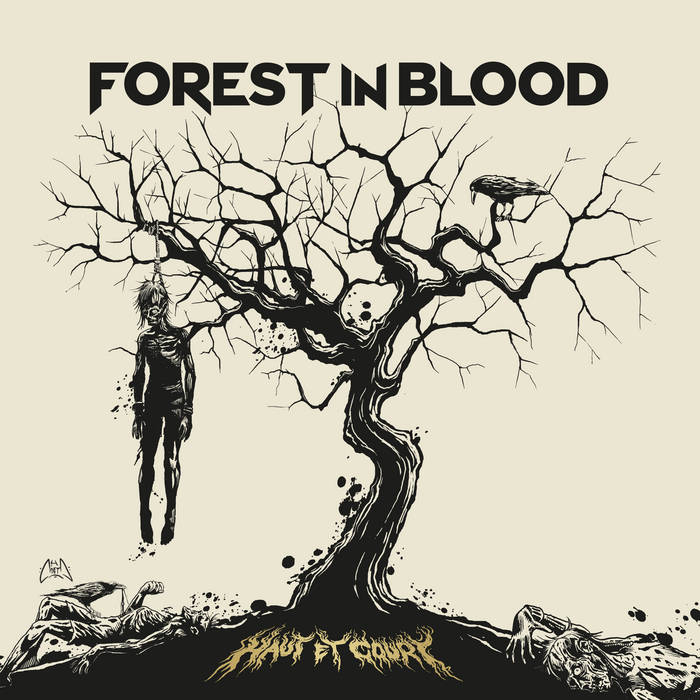 In terms of composition, writing… Do you work as a team or does everyone have a predefined role?

Barth: Actually, we have a guideline, we have a subject. We all know the subject. After that, we share the compositions, at least 3 per musician, more or less. And then we mix everything together, we say “Yeah, I like it, yeah, I don’t like it”. But above all, the new thing is that we welcomed Alek.

Barth: Who was already with us on the other dates, he has been following us for a long time and now, he is singing with us, doing backing vocals. He gave his opinion, he wrote lyrics etc. So now, we are 6!

So your integration went well?

Alek: Pretty well, yeah! Actually, the first time I saw them, it was Pierre Acedo who was…

Alek: He said, “Oh, we just need to take some pictures, a couple of things, you’ll see, it’ll be fine”. I came out completely wasted on rum, but something crazy! And in fact, I had completely forgotten, but the next day, I realized that I had agreed to do some dates with them to follow them, to do the communication, creative things and all the shit…

Alek: I fell for it, but seriously! So, the atmosphere corresponded to me because I had the chance, as a creative, to choose the bands I want to work with. The advantage is that we have a lot of affinity beyond the band with Barth on our respective jobs. All the professions of the creation, the strategy etc, are joined in Forest. We apply things that we do outside and it is what made that we have good results, statistics, to promote our album. And always consult. We were talking about WhatsApp and so on. We are in constant contact about everything that happens.

Alek: Yeah. So, the integration went well, because I am in the same cohesion, in the same thing. And the atmosphere is really good. We have a great time!

Nech: Nech is a j*rk, he’s always yelling at me (laughs)

Alek: A stick hit me (laughs)

Barth: And not in the head! (laughs)

We are at Hellfest. How was your show on the Hellstage? How did you feel the atmosphere?

Barth: You have to admit that the Hellstage is a difficult stage. People aren’t there, they don’t wait for you etc. So we didn’t have a lot of time to get there. We had a lot of people who came to see us specifically. The price of fame!

It wasn’t too hard, with the heat?

Barth: No. No, frankly, it was fine! We had a lot of pictures, a lot of videos that came out… We had BFM that featured us… BFM live, the first band. It’s good, we did the job! 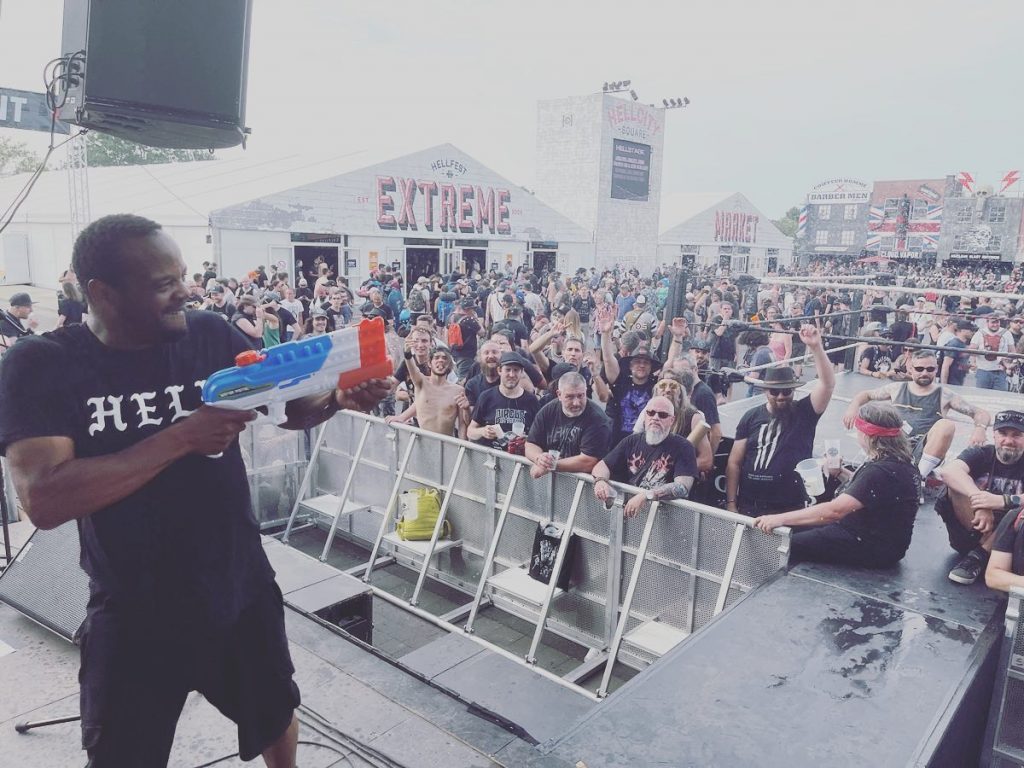 Let’s conclude this interview with an important question… Rum and your band, it’s a great love story. Can you explain it to me?

Barth: It’s Saint James who offers all these great drinks. And at the same time, he’s Martinican…

Elie: It’s the factory in my hometown, so there you go, I’m representing it.

Barth: Yeah, and it’s made in St. Lucia, right?

Barth: St. Marie! Well, that’s where his parents are.

How did you set up this partnership?

Barth: We called them!

Elie: We called them, yeah! (laughs)

Barth: We said, “We’re doing this”, and they were like, “Yeah, that’s cool”. I think they liked being there.

Elie: They don’t specialize in that niche, so they were excited to have a metal band. Plus, it fits with the piracy, the rum, the concept…

That was my last question. I’ll leave you the last word for our readers!

Barth: Come and listen to us on Spotify etc. That’s the best thing!

Elie: There you go. Make music, spin it, share it…

Barth: On all platforms. And then, when you like it, come to a concert and we’ll buy you a drink!

Interview by Valentine KLIPFEL for Distrolution / Distrolution Merch.
Thanks to Forest in Blood for their time.
Thanks to Roger WESSIER from Replica Promotion for the opportunity, as well as to the press team of the Hellfest Festival (Elo, Romain…).

Previous Our weekly discoveries – July 27th 2022
Next The Decline are back in Europe for the first time in a couple of years!