Video interview with AcoD at Hellfest 2018

One of the coolest thing you can do at Hellfest Open Air when you have a Press pass, is meeting tons of band that attend the festival without having to find them among 60.000 people. So, I could interview AcoD from Marseille, France, for Distrolution TV as they are about to release their fourth album.

You’ve never told anybody what was the meaning of “AcoD”. Why?

Fred: Well … we’ve never chose to do so. We just kept it secret at the beginning and I don’t even know why we kept it secret, but it has become a kind of tradition not to tell anybody what the meanin is. Now we stick with it. We found out that it keeps some mystery around the band, but it’s kinda cool though. It bring a little interest with the atmosphere of the band. We will still keep it secret for now.

You’ve just released your first single “Road to Nowhere”. How was the filming of the music video?

Fred: It’s been great. We worked with Igor Omedei who is a very cool guy. Was it you, Raph, who discovered this guy? Or maybe our manager? Well, we watched his works and we fell in love with the way he does. Then, Raph discussed all the details about the music video.

Raph: It’s been a killer experience. We knew exactly what we wanted, so we first worked on our own, then, we submitted our ideas to Igor. He exactly found out what we wanted and his ideas exactly matched ours. It’s been incredible, great team work.

Your 4th album “The Divine Triumph” is darker and more conceptual. Can you tell us more?

Fred: Well, this album is … it’s more about the universe around. It’s a concept album with 11 tracks, 10 tracks and one intro. We dive into the abyss, in a very dark universe, very occult. There are many things coming together, with ancient divinities. Yeah, many things.
We built this universe we never had before, on our previous albums. You have to know that this album is a part of a bigger project. We try to get a real match between lyrics, music videos and artworks. We work really hard to put everything together. Regarding the way we write write songs, it’s really different.

So, how is the songwriting process in AcoD?

Jerome: Songwriting … it’s not a single people’s job. Of course, one of us comes with an idea. We bring guitar riffs, ideas, melodies we have in mind. Then, songwriting is much more about the concept. We play many different styles. We can play heavy-metal, thrash-metal. Back in the days, we didn’t really know what to dobut now, we know what the concept is. We focus on our own style. Our music may be a ding of melodic death-metal, maybe. In the band, we take everybody’s suggestion into account. There is no leader. There are no followers. If someone is not okay, it’s fine. Everybody brings wheat to the mill. 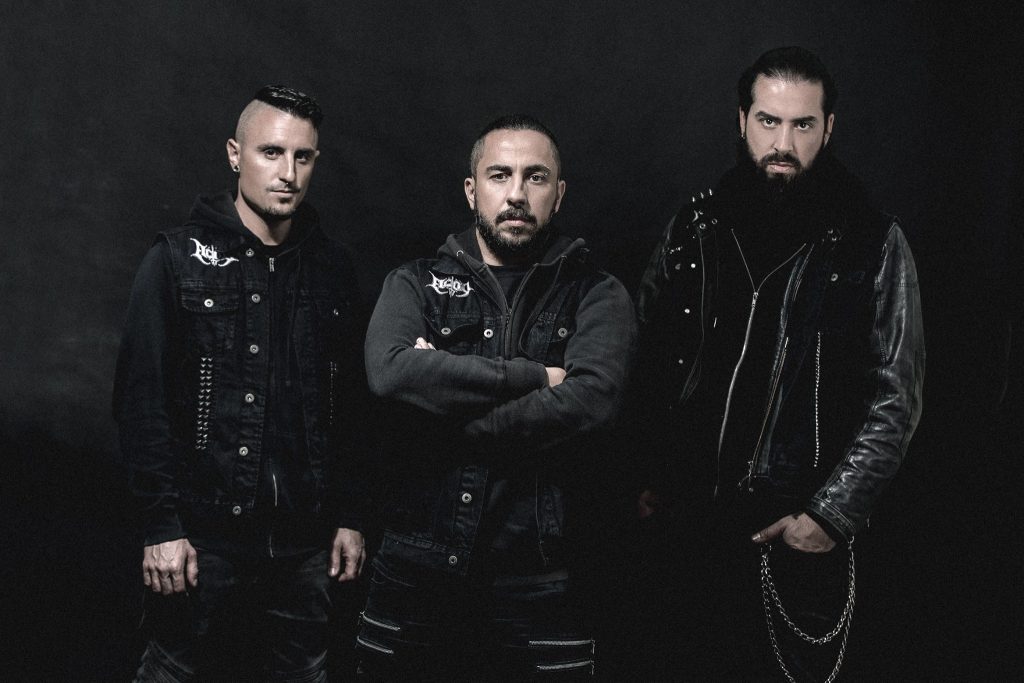 Where did your record and mix the album ?

Fred: For the recordings, we did the drum parts at Puls Studio in Gardanne, France, which is not very far away from our place, in Marseille. We did all the sound takes at our friend’s place, who is Dagoba’s singer, at Eagle Black Studio. We are used to work with him. We did many recordings at his place. I can’t remember how many times but every time, it’s fine. He is very professional and his work is awesome. So, it’s been great!

For the guitar takes, we worked with Matt, who plays in Sangdragon and Nightmare. He his a very good friend of the band and he did great too. Thanks a lot, Matt, if you are ever watching us! Then, we sent all the stuff for the mixing and mastering, to Jens Bogren’s Fascination Street Studio. Jens cared about the mastering and Linus Corneliusson cared about the mixing and he did great too. We’ve had a great team for the album’s recording. Everybody was so focused.

Jerome: They cared about what we wanted to do, artistically speaking, and we have the album we wanted. We made some weird requests regarding the sound, like, overmix the bass. They were not used to to this way. This is because we took some risks about how we sound that we are happy with it now. It’s original. That’s what we wanted. Everybody is happy and fine with this, the people in the band, the people who worked with us. Everybody is fine.

You talked about Dagoba. Are you close to them ? How do they help you in your development ?

Fred: It always helps … when you know some bands who are quite famous, when you are close to them, we meet quite often, we talk, we laugh together, … yeah, we are very good friends. Well, we had talks with these people, especially their singer who is a very close friend. After some time, these people will give you some advice. So you listen and you think about it, how you can use it then you move on having it in mind.

You won the Motocultor Fest contest in 2017 and you played on the “Dave Mustage”. How was it ?

Jerome: It’s been … we played on the Main stage! It was our first ever time we play on a Main stage. It was incredible! We won a contest and were asked to play at 6:00PM, not 11 in the morning, at 6:00PM, without any single band at the same time. They gave a real opporutnity for a band like us. That’s the purpose of this contest. It’s been incredible.

Fred: I hope we can get back there, as a band, or even as a part of the audience.

When did you find out that music playd such a big part of your lives ?

Fred: I don’t really know. I’ve started playing music when I was 17, I think. But I don’t really know … We all got involved pretty quickly. When you start a band with your friends, you don’t expect much. You don’t know what can happen but you get involved. From the beginning. You practice a lot, you buy your instruments, you spend so much time, so you get involved. Then, when you try your best to do things like a pro, you play your first shows and you figure our that people come to see you and buy your stuff, so you respect these people. You don’t want to do shit, or let them think you’re doing shit. These people aren’t stupid. They know when you trick them.

Jerome: We also have a team that grows pretty well, new followers, new people who dig our music. They trust us, like our label. We can’t do things wrong or do like it’s not important. There is trust, mutual respect, between the label, the promoter and us.

So, this is the end of the world and you can only take one album before going to a shelter. What would it be ?

Jerome: I think it would be a Burzum album.

Fred: Speaking for myself, the metal is so … I don’t really know … the metal fan is very open-minded. So, you won’t find metal fans who only listen to black-metal or only death-metal or only heavy-metal. You always listen to some new stuff, in different styles of music.

Raph: I think it’s hard to only pick one album. Even only one band, it’s impossible.

Jerome: For me, it’s my favorite album, well … I don’t listen to this kind of music every day but this Burzum album brought me so much in my life, so if I had to go to a shelter with one album, it would be this one.

Fred: I think I would take a At The Gates album, Slaughter of the Soul. I’ve listen to this album so many times.

That’s not possible, you know? Or maybe an hologram show

Raph: There are many bands we would like to share the stage with, like Death or Sceptic Flesh. We often identify to them among the band. They have something special, related to their universe, or artworks, or the way they work with audio samples. We try to have the same perspective. Yeah, why not playing with them?

Fred: It would be so cool. It would even be logical, I think, with our forthcoming album.

Do you have any last words for your fans?

Raph: Thank you so much!

Fred: Yeah, a big “Thank you” to those who follow us for a long time. We hope that you will like our forthcoming album, because we put so much energy in doing it. We worked hard and we are stoked about the release. You can find our Youtube the first single “Road to Nowhere”, the very first single. There will be a second single on August 17th and the album will be out on August 24th.