I’m today revealing my last interview from the Hellfest 2018! Richy, the guitarist of the Belgian metal band Drakkar, was kind enough to answer a few questions for us. Drakkar have indeed known their debuts back in 1983. I think that we can learn a few things from these guys 😉 Also, there’s an awesome news to discover at the end of the video. Thanks for your time, Richy!

Your band had its beginnings in 1983. What is the magic recipe, to last that long?

So, you have to know that there was a long time, really, where the band died. After uh… 1990! And for a band to last… Well today, it’s, it is longevity that makes that the band lasts, so for big names such as Maiden, Judas… Well, it’s the longevity! So, uhm, regarding… Regarding us today, the band reformed in 2014. And so here we are in full, in full production, in full evolution and a lot of concerts planned for the next year, here at the Hellfest!

30 years of existence! So you’ve known a lot of changes in the music industry. How did you adapt yourselves to all that, over time?

So it’s clear that today, it’s unavoidable! It’s true that social networks, the web are totally unavoidable! And I think that a band like Drakkar, really applied itself to follow this… These new technologies. Today, staying on the… On old… Old principles will not make you advance, or in any case, will not make the band evolve. So today, it’s really very, very important to evolve on digital platforms, as you say. It is a very important element, really!

Now, having a vinyl, to… Having a CD… There are still quite a few fans who… Who need to be able to open a booklet, to analyze… So yeah, it’s… This is my case anyway! Me, I stay in this case, but, for quite a few other people well it’s the download…

How would you define your sound, from a global point of view?

Are the bands that influenced you in the creation of Drakkar still influencing you today? Or did it evolve with current trends?

In fact it’s… It’s all in fact! It’s clear that we at the time, it was… The releases of Helloween, Manowar it’s… It is quite influenced at this level! But it’s clear that if we listen to our last album, there are trashy influences, I won’t say Kreator but yeah, we adapt ourselves and especially, we listen and then uh… What we propose, it still comes from our guts so uh… It’s a set of everything! It’s a set: There are old ones, there are new ones… Uh… That’s it, it’s… It’s complete!

I heard that a new album was being prepared and that you even plan on releasing a music video in the upcoming months. Can we learn more about this? When can we expect a release?

So… There are already a lot of tracks which are in production and the principle is to… At the end of the year, we will release a… A new music video! Exactly, to promote the… The album that should arrive in 2019, so we try to shorten the time between… The albums! My first, it was 20 years. It’s a bit long! There, it’s three years and here, we are… We will go on two years!

On this next album, will you keep your guidelines, or can we expect a change in the songs?

As I said earlier, it’s… It comes from the guts, so that’s what we propose today, it remains in spite of everything in the lineage of “Diabolical Empathy”. But, that’s it… That’s, it’s according to the composition, what… What we feel when we compose! And especially Leny, the singer, who, who lays the texts and who comes with his pretty pointed ideas regarding the compositions! 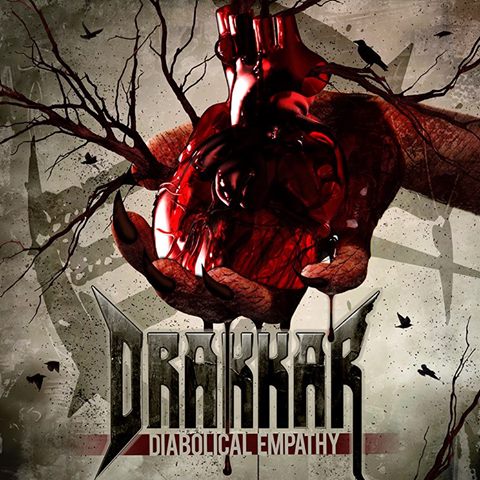 Let’s talk about the Hellfest. I understand that you come here regularly.

In fact, I played… I played eight years ago with my previous band. It totally changed, of course! It’s true that the setting, it’s paradise. In addition, the weather is here, so that’s very important. It’s true that it’s… It’s… So yeah, the culture of all the people who are here it is, it’s phenomenal yeah. It’s, it’s great, frankly!

By focusing on the 2018 lineup, which bands were you most eager to see?

Yes! So uh… I have my friends from Kataklysm who will play later. They are really long time friends… I have known them for quite a while. And here, I’m looking forward to seeing Dimmu Borgir. I was uh… I like Avenged, yesterday it was not bad. Frankly, it’s a good comeback. But it’s true… It’s relatively heterogeneous so there’s really… And then there are some very nice discoveries, huh! I saw Malemort yesterday, it’s a French band, it’s quite good. That’s it, so these are guys who move well and uh… But no it’s heterogeneous so today, there is discovery and some known… Obviously there’s Maiden tomorrow so it’s… It’s the icing on the cake!

Can we expect to see Drakkar live at the Hellfest someday?

Thanks for your time Richy! See you next year!

Previous Anaal Nathrakh stream new album, “A New Kind Of Horror”!
Next Just About Done discuss the artwork of ‘I Am Getting By’!