Home / Interviews/Punk/Even in Blackouts talk about their newest LP out now!

Even in Blackouts talk about their newest LP out now!

Stefan from Stardumb Records was nice enough to introduce me to Even in Blackouts. Learn more about the band and their brand new LP “The Princess Foretold By Her Henchmen, Even” below!

Hello Even in Blackouts. Hope that you’re all doing great? First of all, thanks for taking time to answer a few questions for Distrolution, it’s much appreciated. For those who are not familiar with your band, could you please introduce yourselves, as well as your band? Hello! Yes, we are Even In Blackouts. We formed in 2002. We have gone through a few lineup changes but Lizzie Eldridge and John Jughead Pierson have been in the band since the beginning. Guy Conway, Bice, and John Szymanski have now been in the band for more than a decade.

You released back in June 2018 your LP “The Princess Foretold By Her Henchmen, Even”, can you tell us more about this release? Stefan from Stardumb Records was a fan of the band, and Jughead and he have been friends for more than 20 years. EIB stopped recording 8 years ago, but we missed each other so we got back together to record a few songs just for fun. Jughead sent the songs to Stefan and he liked them very much. But the songs are not ready to be on a record yet, so Stefan agreed to released a compilation of previously released material on a vinyl record. EIB has never been on vinyl before so, it seemed a good idea. 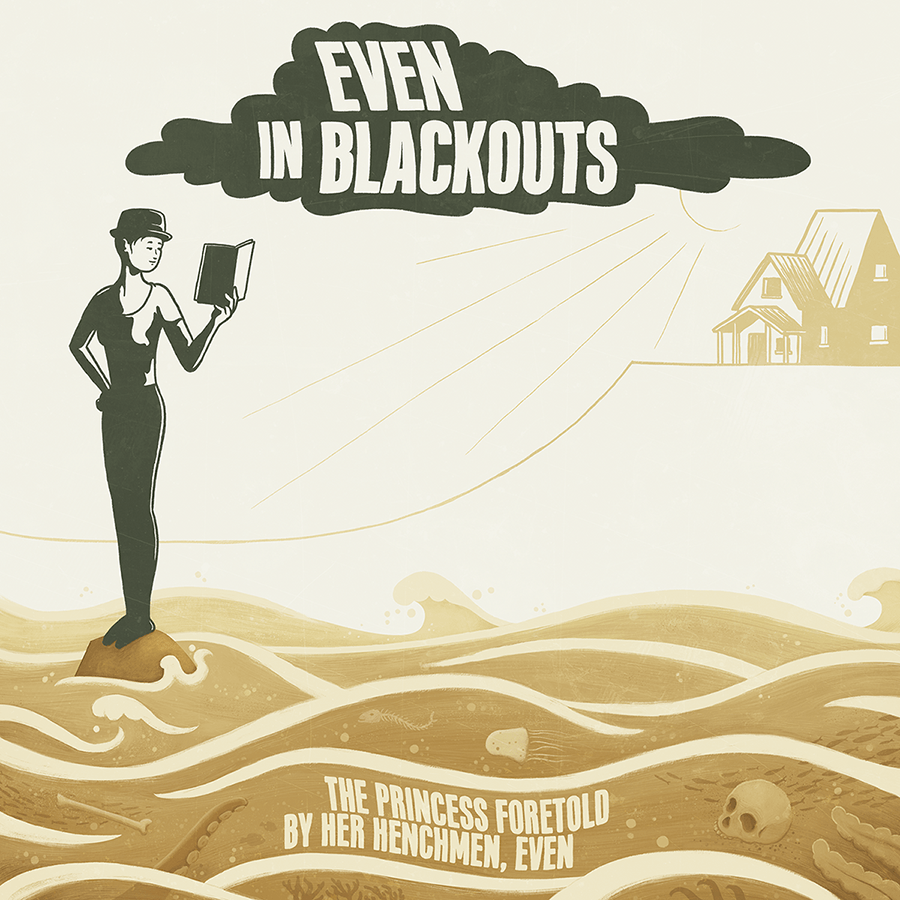 For those who haven’t heard it yet, what kind of songs can they expect on this record? It covers 4 previously released CD’s, over a period of 7 years. The songs were chosen by Stefan and organized by Jughead. They are organized from straight acoustic on side A, to acoustic and electric mixed on side B. The songs range from punk to bluegrass to country to swing to rock.

If you had to pick one track that, according to you, best reflects the spirit of your band… which one would it be and why? The Writer. It is the perfect key for Lizzie’s voice. It also balances a sort of childlike quality with a more aggressive sound. Plus Jughead gets to pretend like he can rap. It is one of our most requested songs on tour.

I also understood that you guys are currently in the studio recording your new album. Is that true? When can we expect it to be out? We are hoping to release it before our tour in Japan in February. We imagine it will be out around the end of December or the beginning of January. It will have 15 new songs and the title will be called: ROMANTICO!

Last but not least, what would you say has been the biggest highlight of your band’s career so far? This might sound sappy, but there is no specific time that is the best. The band has always loved being together, touring, hanging out. Even during the years we did not record we were all still friends, playing together, having dinner and drinking late into the night. The best experience is that we get to keep doing it, because we want to, and love playing together. We all have families now, and we have become an even bigger family because of it. Our life together is the biggest highlight.