Home / Interviews/Punk/Krang, from your teenage years to your stereo

Krang, from your teenage years to your stereo

If you are into skatepunk, Krang is a band you could have heard about for several reasons. The guys use to put on shows for other bands in Eastern Czech Republic, they played in a bunch of other Czech punk bands and they have already toured in several countries. Tight schedule, but Dan Rola took the time to reply to our questions.

Hey Dan ! How are you doing ? Please could you introduce Krang to Distrolution’s readers ?

Hi everybody! Of course I can. We are a punkrock/skatepunk band from Czech Republic playing since 2015. I´m Dan (vocal, guitar) and on my side are Henny (drums, vocal), Stanley (bass) and Gabo (guitar). It’s hard to say how we sound like but maybe people who like Frenzal Rhomb, Descendents or Set Your Goals can like us to.

When it comes to punk/rock or skatepunk, Czech Republic is not the first country to come to mind. However, you guys already toured in lot of countries, from South America to Japan. Impressive ! How the hell did it happen ?

That’s true, Czech republic is small country but there is a lot of people who are in the punk/rock or hardcore scene. Maybe the music we play was more popular 10 years ago but I think it’s still on a good level. People are coming to shows and there is also a lot of great bands.

Well, I think we are very lucky! It’s awesome that we are playing for only 3 years and we had chance to play in so many places. It’s a Really big help that our first record, called Baddest Brain, was released on Bird Attack Records and Melodic Punk Style, so lot of people abroad have discovered our band thanks to them. One day we received message from Alejandro (Destiny booking – Costa Rica) saying that he likes our band and he asked if we wanted to tour Mexico and Central America in November 2016. We were so excited to tour so far away from home. We played 8 shows across Mexico, Guatemala, Salvador and Costa Rica and it was one of the best experience. We met a lot of new friends and bands and I am really grateful for that!

This year (2017) was also great. We played a lot of shows in Czech Republic and also in Austria, Belgium and Israel but the top was our Japan tour in summer. Japan is awesome! The people, food, hospitality  everything is excellent! We played 5 shows and especially the last one in Tokyo was one of the best we ever played. Show was sold out and people absolutely crazy. We would like to thanks Waki and RNR booking team for this opportunity. We love you guys!! 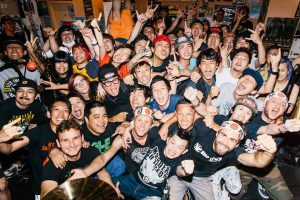 Your lyrics are a lot about the 90’s subcultures, comics and TV shows, but you also have more serious songs, especially about the situation in the middle-East (Lions of Kurdistan, Skateistan, …). Is it important to you to bring political stuff into your music?

This question will be better for our bass player Stanley because he writes the lyrics but I can say this. The main intension of our lyrics is about things we like or things which seems to be funny for us. When we started to play together, we recorded our first EP called OK USA! There were songs about 80’s or 90’s action movies like Top Gun, Demolition Man or Bloodsport. Lot of our songs can looks like a “nerd stuff“ but we also have songs about serious problems. For example Lions of Kurdistan, Skateistan or No fun in fundamentalism. I think it’s important to have opinion on what is going on and it’s also important have songs with message. Truth is I don‘t want to describe our band as a political band, but there are a lot of things which we have clear attitute.

You guys also play in several other bands. Is Krang your main band ?

Yeah that‘s true! Henny and Gabo are playing in band called Criminal Colection and for them is Krang more like a side project. They are playing for 13 years now and they had also played in a lot of countries like Brazil, Canada, Russia, Israel and others. In my opinion, Criminal Colection is no.1 pop/punk band in Czech Republic and you should definitely listen their stuff. For me and Stanley, Krang is our main band. Besides Krang, I’ve started to write my own songs and play some acoustic shows, but Krang is still priority for me.

You can also check my acoustic projet here : https://www.youtube.com/watch?v=CtDrEouf22w

What’s on your plate for 2018 ? Any album or upcoming tours ? What can we expect from Krang’s next record ?

We will soon release our new album called Singalong. There will be 11 brand new songs and I’m really looking forward to put it out. I think people can expect the same than what they know from us. Fast and short songs or catchy melodies. I hope people will like it. We definitely want to tour across Czech Republic with our new album and if everything goes well, we will tour abroad.

Thanks Dan ! Any word for your fans ?

Yes! I would like to thanks all our fans for supporting us, all friends we met during playing and all
people who helping us. So stay tuned and see you at the show!! Thanks for interview!