Italian skate punks Thousand Oaks will soon release a new EP, titled “Hell Is Empty”. The guys were kind enough to answer a couple of questions linked to this upcoming release, as well as their favorite live show so far. Check out the full interview below!

Hello Thousand Oaks, thanks for your time. Would it be please possible to introduce your band to our readers, as well as your roles in it?

Hi Valentine! Thanks for the interview! We’re Thousand Oaks, a skatepunk band formed by some ex members of Jet Market in Rome in 2015. So far, we released two full lengths and two splits, our new EP is about to come out in November.

The pandemic has had two faces for us. On one hand, it hit us very hard as we’ve been forced to cancel two tours and some shows we were working on. Besides, it’s been very challenging since we live in different countries and moving around has been complicated if not impossible.

On the other hand, we had plenty of time to work on our songs and ideas and we’ve come up with a million new demos. So, at the end of the day, I hope we made the best out of the situation.

You’re soon going to release your new EP, “Hell Is Empty”. How long have you worked on this EP and where did you find your main inspiration?

During the lockdown, we had the chance to spend a lot of time working on countless ideas and demos we had. Once everything was put together, we ended up having a bunch of new songs and so we started playing around with the idea of putting out seven-inch. We were eager to release something as soon as possible, so a full length was out of the picture.

While re-demoing the songs we selected for the seven-inch we realized the timing wasn’t right, we would have had to go for a ten-inch EP because the songs were too long. At that point we thought we could push it up to six songs as they would fit in the new format anyway with no problems. So, long story short, we basically picked our favourite six from the pile and went with it.

Because of the pandemic, everyone had to record at their own place and send over the tracks when they were done. So, this time, we unfortunately missed all the fun of being locked in the studio together for days. I guess we’ll just have to wait and go extra crazy next time to make up for it!

We like to keep a constant visual link among the artworks of our records so we’re always using digital printings and keeping the same layout/fonts. The artwork we used for Hell Is Empty is from a Thai artist that goes by the name of GrandFailure. We love her work and we’ll most likely keep on using her illustrations for our future releases. We picked this one for the EP because it matches the title perfectly in our opinion. 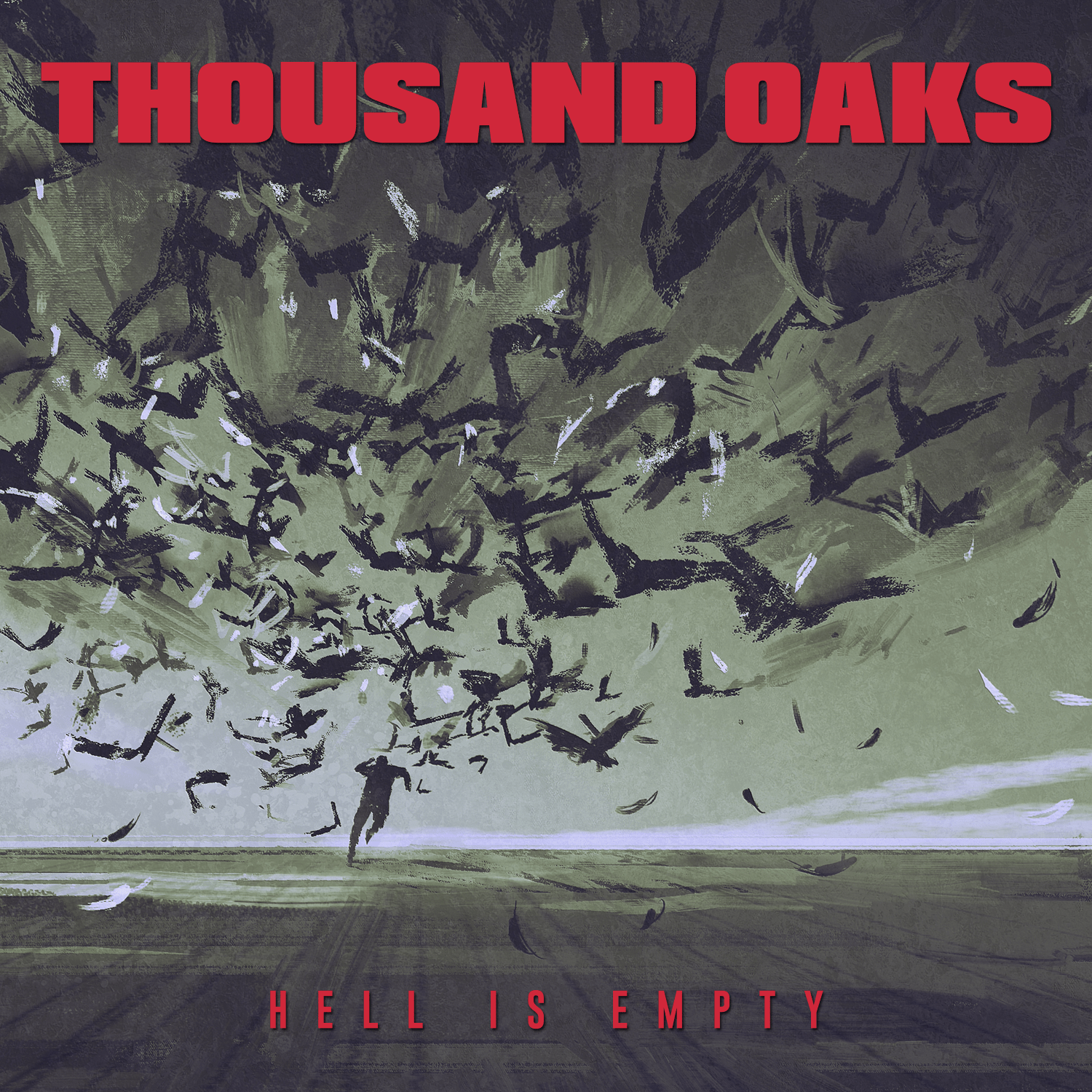 I’m sure you are, like a lot of people, missing live shows. Do you already have some dates planned for the end of the year or 2021?

Earlier this year, we were about to announce a Canadian tour that some friends were helping us to book over there but then everything had to be put on hold. I hope we can try and reschedule the whole thing next year if it’s doable or maybe even in 2022. Same thing happened with Punk Rock Holiday but we’re supposed to be playing next year so we just have to be patient now. I strongly doubt we’ll be playing live shows before next year though.

Out of all the live shows you’ve ever played, has there been one that has stood out to you? If yes, which one and why?

All the shows we play are somehow linked to good memories but if I have to pick one, I’d say the most fun we’ve played so far with Thousand Oaks is KNRD fest in Germany. The place and the company were simply amazing, and that fest has this particular atmosphere, so unique and warm. We totally loved it.

If you had to create a 5-song playlist that best represents your band, what songs would you choose and why?

I would probably choose one from each release, to feel how our sound is evolving from record to record and so I’d go for:

1- Being The Chain Breaker (from Monsters Begetting Monsters)

4- Gone Astray (from Bound For Destruction)

5- Backfiring Bait (from Hell Is Empty)

Thank you very much for the interview. Stay safe everybody, hope to see you around soon!