Home / Interviews/Rock/Earthstate release “What If” 3 years after their debut album!

Earthstate is a band we’ve been following for quite a while now. 3 years after the release of their debut self-titled album, the guys are now back with a new single, “What If”. Check out the full interview below! 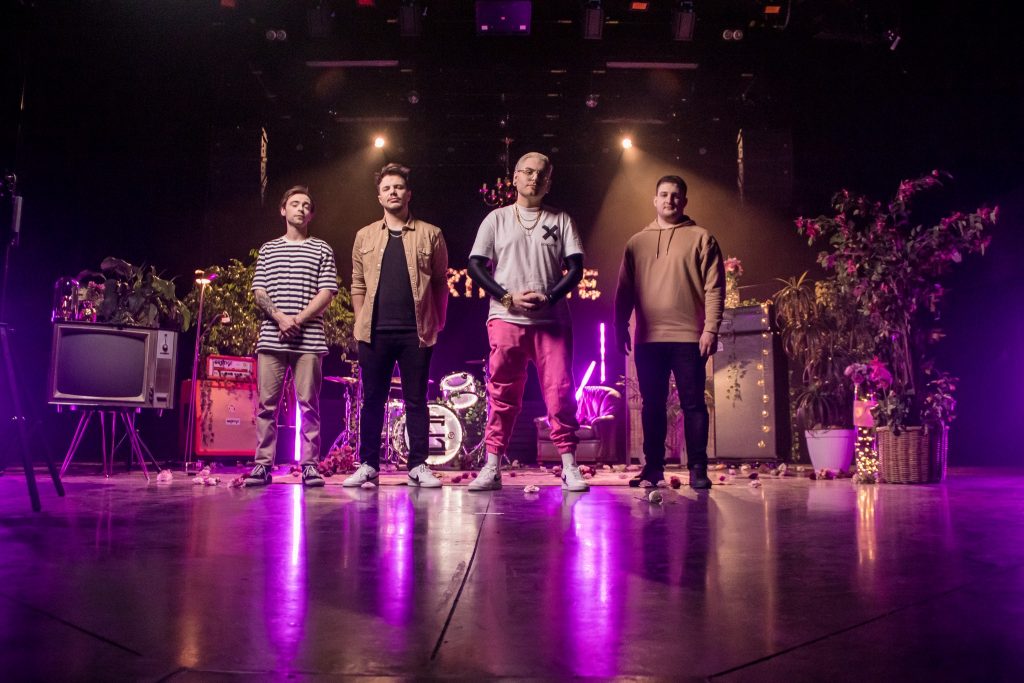 Hello Earthstate, thanks for your time. It’s been a while! How have you guys been doing?

Hello! Thank you for having us, it’s a pleasure to talk again! We are doing pretty well, our new single is out for a few hours at the time we are writing this so we couldn’t be more exited and pleased by the first feedbacks that are very positive. As many bands and artist, we are more than happy to be back at it again after these lockdowns, but we are focus on the next steps now.

Would it be possible to quickly introduce your band, as well as your roles in it? I know that Maxime had to leave the band and Yévic is therefore your new guitarist!

We are a french rock band with many influences from modern alternative genres like post-hardcore, pop-punk, metalcore… to more mainstream pop, hip-hop etc. If you like bands that mixes melodic and more heavier parts, with sounds inspired by various genre, then you should try to listen to us!

The band was founded a few years ago by Stane (vocals), Maxime (Guitar), Thibs (drums) and me, Dewi (bass). As you said, Max had to leave the band after the realease of our first album because of work opportunities, but he is still our best friend and very close to the band. We met Yévic shortly after, and started working with him on these new songs. The feeling was immediate and things were very natural, we can say now it’s like he always been there.

Let’s get straight to the point. You guys are back with a new single, “What If”, featuring Saxl Rose. How did this collaboration happen?

During the writing process of our new song, we thought it could be great to have a guest on one song because we never done this before, and we had this song with a sax solo. We knew Saxl because we were following his work and his collaborations with artists that are huge references for us like Paramore, Neck Deep, State Champs…It was the perfect opportunity to have an original and talented guest in featuring. So we tried to message him on IG, we sent him the song, and he killed it !

How would you describe this single in 3 words?

This song is released 3 years after your debut self-titled album. How do you prepare for a comeback after several years? Was there any particular pressure?

We didn’t change that much in the process, still a lot of porto drinks, bad jokes and writing riffs ! No particular pressure but after the first album we had lot of possibilities to affirm our sound. We took some time to think about which parts of our first album we wanted to emphasize.

The single was released along with a music video. Would you mind sharing the video shooting experience with us? Any funny stories to share with us?

It was a great experience, with a lot of DIY but we had a great team of friends and professionals to help us, and we are very proud of the result. Everything went good during the shooting days, maybe we have funny pictures from it that we may share one day!
The most awkward moment was before the last day: all the team was driving to the venue were we had to shoot, but when we arrived, the whole neighborhood was closed due to a running competition. We had to negotiate with many people to go to the filming location, but we finally reached it!

Thank you again for having us, enjoy “What If” on all your favorite streaming services, and stay tuned for the next singles that will come in the next few months!

Previous Omnigone and Protagonist come together to present a split!
Next Dragged Under have revealed their new record!