Another interview with a very promising French band: Pogo Car Crash Control! I indeed had the opportunity to interview them at the Hellfest Festival. Learn more about the band’s first experience at this amazing Festival, as well as their upcoming projects for the rest of the year!

How did you live your first time at the Hellfest? Not too much pressure?

(Simon) Well no it’s okay…
(Louis) It was too early to really have the pressure.
(Lola) Yeah!
(Louis) But yeah it was… Yeah… Well lived!
(Olivier) Well we’re used to it anyway!
(Lola) We were more excited than… Well there was no pressure!
(Simon) But it was very cool, there were people. And it’s true that… At the Hellfest, compared to other festivals, it’s… There are the sets that make that it’s a bit impressive like… So that’s true, it gives a little pressure.

How do you make yourselves comfortable on stage? Lola, I saw that you had fallen and it’s not the first time. Has it become a kind of tradition for PCCC?

(Lola) Yeah, I fell over! And no, it happened only on the Download and Hellfest. Normally, I land well, and there I slipped and eh… Well, after that, anyway, you’re in the show, you get up! As long as you do not hurt yourself, get up! I’m not the only one who has already fallen and we all get up.
(Louis) Simon practices the falling on drums!
(Lola) Simon yeah, often!
(Louis) It’s more annoying!
(Lola) And Olivier he goes straight to the public!
(Simon) We totally accept… Failure!
(Lola) It’s part of the show!
(Louis) We accept the failure!
(Simon) Yeah, that is, if there is I don’t know… A guitar that falls because the strap is broken, we continue! It’s part of the thing!
(Olivier) It’s part of the thing yeah!
(Simon) That’s it!

Your band name is in English, but you have privileged the French language for your songs. Why this choice?

(Simon) Well, after that, that does not mean… It doesn’t mean anything Pogo Car Crash Control. So uh… I don’t know if we can say that it’s really English!
(Olivier) Yeah that’s true!
(Simon) Because even uh…
(Lola) It’s Flemish in fact!
(Louis) An assembly of English words!
(Simon) Even, I was speaking to English people and I was saying “I play in a band called Pogo Car Crash Control” and they understood nothing! They were like: “What? Pogo Car Crash Control?”. It was not easy for them to…

And besides, this band name… What does it mean?

(Simon) Well… Nothing!
(Louis) In fact, it’s Olivier’s brother who found the name. And when we formed the band, we needed a name. He had a Word file with different band names and we took the one we found the coolest. And it was Pogo Car Crash Control!

But, why did you find it cool? There must have been a reason!

(Olivier) Well, I don’t know, it’s like punches with each word! And then it takes all the space on the poster!

If you had to define your sound in 3 words, which ones would you choose?

“Déprime Hostile”, your first album, is available since the end of March 2018. Can you tell us more about it?

So we can say that this is your favorite track on the album?

You recently said that this album, you did it in a hurry, unlike your first EP. How did the composition and recording of this record happen?

(Olivier) Well, the EP we had all the time we wanted to write our best songs and put them in an EP, since it’s a bit… The EP is the condensed of all the years of the band since it exists. The best! And it’s the best of the best, because there are only 6 tracks, so we had a lot more. And so, we went back to the studio quite soon after the EP was released and we had to compose new songs quickly, because we had put the best. So we really wanted the album to be better, so we did not pick up old ones. And we did it a bit in an emergency, yeah effectively, but it was cool!

Within the band, how do you manage the song composition?

(Simon) First by the melodies, effectively, in general! There is only one track where… On “C’est pas les autres”, where I had written a text a little rap. I wrote it like that, and I had fixed it on an instrument that Olivier had sent me. And otherwise, in general, we sing a little bit in yogurt and we still write a little… But we are looking for melodies first without writing, in fact! At first, that’s it!
(Olivier) Yeah yeah! It was the starting point of the band, to compose that way and not to privilege too much the text, as we usually do in France!

If we go back to the Hellfest. For a young band like yours, playing on the Warzone is a bit of a consecration, right?

(Olivier) Well there were some good ones anyway!
(Simon) yeah there were good ones, yeah. After, effectively, it’s a big recognition to be at the Hellfest, as a band it’s…
(Louis) Well the Download last week it was very cool too!
(Lola) Hell yeah! And for the joke, in the thanks of the album, we had thanked the Hellfest, while we were not programmed! We thought, “Go on, that will bring us luck!” and two weeks after… We were programmed, you see! We are bound to what is happening!
(Simon) But otherwise there are lots of concerts, bars like in Brest where…
(Olivier) Yeah yeah…
(Louis) After it’s definitely something to play at the Hellfest!
(Simon) Yeah that’s for sure!
(Louis) Because it’s like, the temple of music a little extreme! And we’re happy to be part of this big family!

What do you still have planned for the end of the year?

(Louis) Still a lot of cool concerts!
(Lola) Yeah!
(Olivier) Yeah, the tour continues until December! In January, we play again in Paris for a headliner at Petit Bain, so we hope we will do like at La Maroquinerie, that we will fill the room! And also, we will soon sign on a Record Label in Canada. So we’ll go back to Canada for a tour a little more consequent in June, apparently! So that’s about what awaits us and then well… From there…
(Simon) The States!
(Louis) We will make a second album too!
(Lola) The States, Mexico, Brazil…
(Olivier) From there we’ll do the second album, yeah! 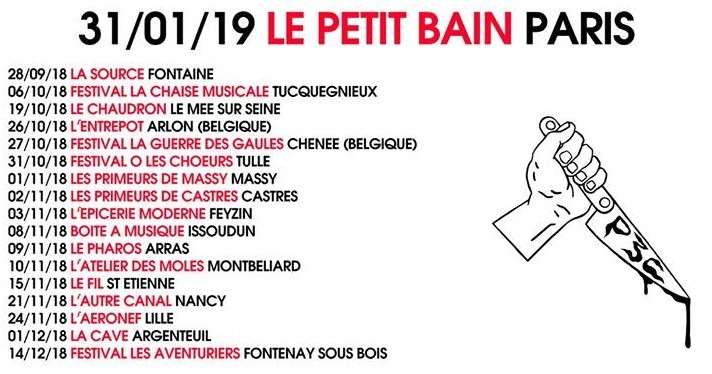 Have you already started working on this new album?

(Louis) Olivier and Simon are quite productive in terms of riffs so we put a lot of sounds in rehearsals. And yeah, we already have 6, 7 tracks already well done for a potential next album!
(Simon) After that it’s not said, maybe we will throw them away!
(Olivier) Yeah that’s right, maybe, we are not sheltered from this kind of thing!

Thanks for your time guys!

Previous Gathering Darkness to release new 7″ EP in October!
Next Redrum04: the guys unveil their new video for “Stay”!