What first began as a backyard show has now grown into one of Western Canada’s best mountain moshpits in British Columbia’s Okanagan Valley. Reaching its 10 year milestone, Armstrong MetalFest is now anchored as one of the largest gatherings of metalheads from across Western Canada and beyond. The 2018 line-up will feature over 30 bands performing on July 13th and 14th at the Hassen Arena in Armstrong, BC.

Taking influence from Europe’s music festival circuit, Armstrong Metal Fest is a heavy metal celebration that encourages metal heads from across Canada and the globe to mosh and camp with the backdrop of great outdoors of British Columbia’s Okanagan Valley. What started as a backyard party in 2009 with nothing but eleven local metal bands such as Terrifier, Xul and Odinfist to name a few, has grown into a a huge success admired by the Western Canadian Metal scene. 2017 was the ninth year of the festival and was its largest year for music and attendance. Previous years of the festival have seen line ups with Cattle Decapitation, Suffocation, Beyond Creation, Dayglo Abortions, Rivers of Nihil, The Zenith Passage, Anciients, Bison BC, Striker, Crimson Shadows, Holy Grail, Archspire, Cryptopsy, Unleash The Archers, Divinity, Into Eternity, Ninjaspy, Vesperia, XUL, Odinfist, Death Toll Rising, Gomorrah among many others.

“Everyone in West Metal Entertainment Society has put in the extra effort in making this year the best year we have ever had. Celebrating 10 years of this festival is a big deal! There were people who were quite skeptical about the event when it first originated, some even went as far as to say “it would never work” and that “it won’t last”. Now ten years later, the tone overall is very welcoming and has been for many years!

This year’s line up brings together a good mix of bands that have never played and fan favorites. Kataklysm has been a band we have sought after over the years and have finally booked! It’s great timing also with them releasing a new album in June!

This year’s Armstrong Metalfest is a milestone for us. We have successfully made it to a decade of metal in the Okanagan!” 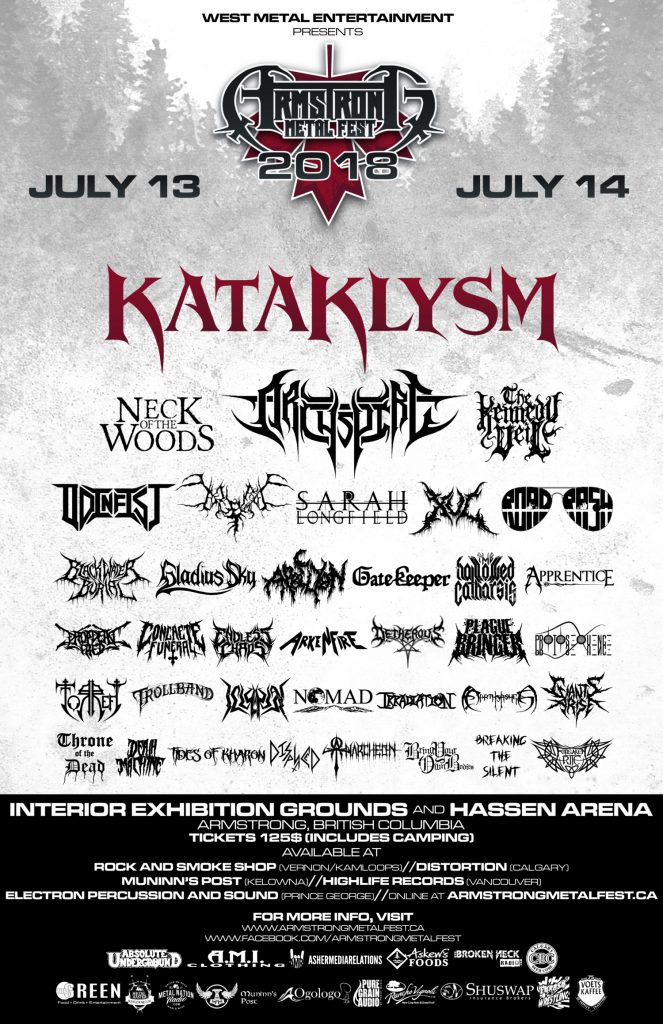