Formed in 1989, MORTUARY is one of the oldest thrash metal bands in France. The band consists of 5 members: Patrick (Vocals) – Jean Noël (Bass) – Alexis (Guitar) – Bastien (Guitar) and Yohann (Drums).

Mortuary released a new album ‘NOTHINGLESS THAN NOTHINGNESS‘ in 2016, which was welcomed with open arms by their fans!

Vocalist Patrick GERMONVILLE, explains, for the first time, the reasons that led the band to choose such a visual for the cover of their latest album! 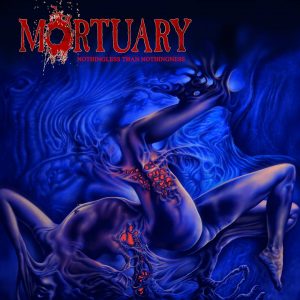 “We were looking for a cover that would represent the general idea of ​​the album, namely the fight against the disease that gnaws us. Not the illness that happens suddenly but the one that has been present in us for a long time. The illness that we have felt approaching, settling and against which we will fight.

The general idea of the songs ​​”U-man Slept, K-os Crawled”; “K” and “Kingdom”. This letter K is present in each of these titles because it is the abbreviation that we note on medical records when the patient has cancer. This disease that lives and throbs in us. The one who shares our daily existence, invests every part of our body, a second carnal envelope in short, destructive. The one that mixes us with nothingness.”

Their latest album is now available everywhere in Europe, go grab it while you can!