The Poles of Decapitated release a new official video for their track “Kill The Cult” from the album ‘Anticult’ released on Nuclear Blast last year.

For this last clip “Kill the Cult”, the band hired again the director Lukasz Jaszak. This clip is also the first since their legal problems in the United States last year.

‘Anticult’ highlights just how vital Decapitated have remained two decades deep into their career. Decapitated have long been undeniable masters of their craft, and they are expanding their parameters with Anticult, which should elevate the band’s profile beyond the death metal realm in which it has dominated for years.

“Anticult represents the legacy and future of Decapitated,” said guitarist Vogg. “We’re extremely proud of the record, in both the song compositions and the production. This is the best representation of our music, and we’re really excited for the world to hear it!”

The album’s massive musical leap forward is evidenced by “Never.” It’s a song with an incredible bite and retains Decapitated’s signature fury. But it’s also undeniably catchy and takes up residence in your brain and stays there.

“‘Never,’ the first track we are showcasing from the record, is fast, it’s technical, and most importantly, it’s heavy,” Vogg commented. “For us, it’s what Decapitated is all about… and it will be really fun to play live. Enjoy it!”

Vocalist Rasta weighed in about the subject matter of “Never,” offering this insight into the lyrical content: “There is no mystical, doomish fate waiting for us. The only judgment pending is our own. The simple relationship between cause and effect is what determines our future. We are now witnessing something that should never have happened — our homes have become our civilization’s grave.” 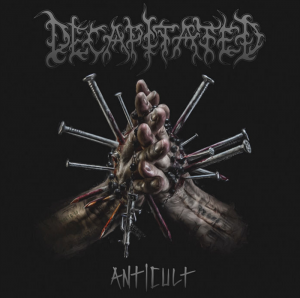 The mixing was done by Daniel Bergdstrand (Meshuggah, Behemoth).

Previous German metallers Time, The Valuator release video for “In Control”!
Next The Ones You Forgot – Too Afraid To Say