Hands of Despair returns with their Third album named “Well of Disquieted”. Their new album will be release on April, 6th, 2018 via Deathbound Records.

Showcasing an amazing array of guests including extreme metal legend Luc Lemay (Gorguts), the band is offering an album chock full of massive, punishing soundscapes that clocks in at 77 minutes. Metal Sucks deemed “Well of the Disquieted” worthy enough to be included in the 2018 edition of Albums That Will Fuck Your Face Off, a piece published last month.

“Well of the Disquieted” is a conceptualized tragedy centered around mental illness where each song brings forth a variation and an aspect of the disease displayed on songs like La ballade des gens heureux, based on the life of Virginia Woolf. The artwork created by Travis Smith (Opeth, Katatonia, Anathema and more) captures perfectly the struggle that people afflicted with mental illness must face.

Strong off the release of their album Bereft in 2016, Hands of Despair spent most of 2016 and 2017 touring and sharing the stage with some of the genre’s most prolific acts garnering them wider exposure and expanding their growing fan base. Countless hours went into crafting the perfect sound and feel for the album’s concept which also features collaborations with many of the local scene’s mainstays including Marie-Helene Landry (Obsolete Mankind, Borborygme, ex-Despised Icon), Sébastien Croteau (Necrotic Mutation) and Vena Kava (ex-Aversion). 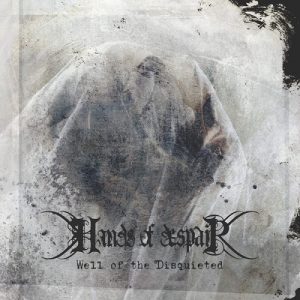