The keepers of Middle Earth, Summoning, are back with a new album”With Doom We Come” . This new album will be released on January 5,2018 by Napalm Records. Five years after “Old Mornings Dawn”, Protector and Silenius have turned a new page in their bottomless saga and are finally back with a brand new album! 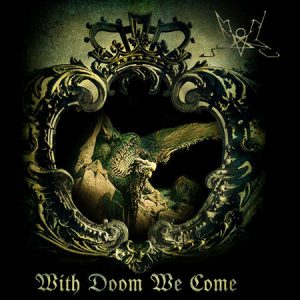 What began as a project deeply rooted in traditional black metal took on an epic twist in the years that followed – Evergreens like Dol Guldur (1996) and Let Mortal Heroes Sing Your Fame (2001) bear witness to a continually refined sound landscape. With “With Doom We Come”, Summoning remains in its surreal values with a sublime and majestic album like an ultimate soundtrack for a fantastic journey.

“Sagas and myths culled from J.R.R. Tolkien`s vast universe are the black blood that courses through Summoning`s veins, and With Doom We Come the ultimate soundtrack to a fantastic journey!

Opener ‘Tar-Calion‘ is a fitting ode to the last king of the island of Númenor, while ‘Carcharoth‘ tells the bloodthirsty tale of Arda`s mightiest wolf. Sagas and myths culled from J.R.R. Tolkien`s vast universe are the black blood that courses through Summoning`s veins, and With Doom We Come the ultimate soundtrack to a fantastic journey!” – Napalm Records

Summoning reveal today the third trailer of “With Doom We Come” :

“And in the glade a light was seen …“ The past years have been a time of troubles, setbacks, disputes – and of resulting frustration. And then, the summonings faded and silence arose … Yet, it hasn´t been the end that was dawning. But in the ashes still a dim light was gleaming. The dying embers were set ablaze by ongoing dedication and new inspiration. And from the ashes fire was flaring to heat the forges again …” – Summoning